Going on a Tear Once Again, Tread Carefully With Canoo Stock

Pulling back at the start of 2021, Canoo (NASDAQ:GOEV) stock is bouncing back in a big way. As of this writing, shares are up 30.4% in the pre-market. Why are investors diving back into this SPAC (special purpose acquisition company), which completed its merger with privately-held electric vehicle maker Canoo late last year? 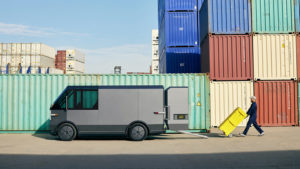 Chalk it up to a news the company held partnership talks with Apple (NASDAQ:AAPL) in the first half of 2020. As you may know, the big tech powerhouse is throwing its hat into the EV ring.

Given that this is something that happened months ago, there may not be much more to the story. This company hasn’t commented on its prior talks. And, it’s possible Apple has gone in another direction.

But, even if the company doesn’t ink a deal with the tech giant, the rally in Canoo stock could continue. Shares could continue to climb, as the EV bubble remains fully in motion.

So, what does that mean for investors a little late to the party? There’s possible upside from here, but tread carefully. Shares were changing hands for $12.50 per share as recently as Jan 4. A pullback back to this price level could happen if enthusiasm takes a breather.

There may not be much meat to the above-mentioned news of last year’s partnership talks with Apple. But, the Silicon Valley behemoth isn’t the only high-profile name looking to work with this upstart.

Canoo already has an existing partnership with Hyundai (OTCMKTS:HYMTF), which was also an early investor in the company. Which, given recent news Hyundai is in talks with Apple about an EV partnership, makes things all the more interesting.

Outside of the whole possible Apple-Hyundai web, there’s also been reports the company will enter a contract manufacturing deal with Magna International (NYSE:MGA). The auto parts giant has been active in partnering with other early-stage EV makers. As you may know, Magna last year inked a similar deal with Fisker (NYSE:FSR), another popular electric vehicle play.

In short, the company has plenty of possible partnership deals in the works. But, it’s still uncertain whether the headline-making news will result in an actual deal (which could put more points into GOEV stock). Or, if it winds up moving in a different direction.

Excitement over the Apple talks could fade. But, even if Canoo falls back from here, there are other reasons that make this unique EV upstart an interesting investment opportunity.

Could the Unique Business Model be its Path to Profits?

With so many EV companies going public via SPACs, it’s tough to differentiate them. Sure, each one differs in the details. But, by-and-large, upstarts like Fisker are employing a strategy similar to that of established players like Tesla (NASDAQ:TSLA).

However, this one is taking a more unique approach. As InvestorPlace’s Mark Hake wrote Jan. 11, Canoo is offering its vehicles on a subscription-only basis. At first, this sounds like a traditional auto lease. But, based on the details (no lease term, no down payment), it’s more like applying the SaaS model to vehicles.

Given this revenue model’s higher gross margins, I agree this sounds like a surefire way to quickly scale up to profitability. But, while it sounds good on paper, I am skeptical whether it will play out well in real life.

Sure, millennials and others looking for the cache of driving an EV, but lack the money to buy a Tesla, may be eager to sign up. But, will U.S. households be willing to participate in an arrangement that requires little upfront commitment, but long-term is a much more expensive way to have access to a car?

Only time will tell whether this unique business model pays off. Like with other newly-public EV names, the company touts ambitious financial projections for later in the decade. And some analysts, like Roth Capital’s Craig Irwin, see sales soaring to $1.4 billion by 2024. Rating shares a “buy,” Irwin’s price target for GOEV stock is $30 per share.

Canoo remains a high-risk opportunity, given it’s speculation fueling its recent price moves. But, that doesn’t mean shares will pull back in the near term. And, not only due to the possible partnerships in the pipeline. With continued enthusiasm for EV stocks, this stock (currently at $22 per share) could head toward the $30 per share price level in the near-term.

But, be careful. The renewed interest in GOEV stock could fast reverse course, if recent rumors fail to produce actual game-changing news. Tread carefully, but this definitely remains an EV stock to keep on your radar.

On the date of publication, Thomas Niel did not have (either directly or indirectly) any positions in the securities mentioned in this article.