You might not have room on your list of special purpose acquisition companies (SPACs) for one more. But you’ll definitely want to take a look at Experience Investment (NASDAQ:EXPC), a SPAC from KSL Capital. And if you’d like to enter into a truly different type of investment, then EXPC stock could be right up your alley. 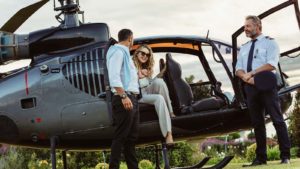 To be honest, Experience Investment is nothing more than a mere shell company. There’s nothing super exciting about that. For a while, the stock traded sideways because blank-check companies have no real business operations. All of a sudden, however, a price explosion happened with EXPC stock. I mean, this thing took off like a helicopter.

Okay, so maybe I gave away the big secret about EXPC stock too soon. Suffice it to say that the business of “air sharing” in urban markets could become highly lucrative. If so, then you’ll probably want to own EXPC shares sooner rather than later.

EXPC Stock at a Glance

From late 2019 to late 2020, there wasn’t too much action with EXPC stock. That’s not unusual for pre-deal SPAC stocks. With those stocks, the price could stay near $10 for many months while investors wait to find out which firm the shell company intends to merge with.

So, EXPC stock clung near the $10 level for a while, much like an aircraft warming up the blades and waiting to take off. In December, it taxied down the runway, climbing its way up to $11 and change. That was just the start of the big move, however.

As you’ve probably guessed by now, the Experience Investment SPAC is merging with a company that’s involved in the helicopter-rental business. To be more specific, the SPAC will bring Blade Urban Air Mobility to the public markets.

You could say that we’re witnessing a historic moment as this SPAC merger will create the first publicly traded global air-mobility firm. However, Blade isn’t itself a new company.

In actuality, Blade, which bills itself as a helicopter taxi company, has been around since 2014. The company started out by offering short-distance aviation trips for slightly less than $1,000.

Later, Blade started offering helicopter flights from Manhattan to the Hamptons. This enabled travelers — or at least, those who could afford it — to bypass traffic and possibly shorten a two- or three-hour trip to less than an hour.

Blade was recently valued at approximately $825 million. The company has come a long way, as Blade was valued at just $140 million in 2018.

When the SPAC deal is fully finalized, Blade will trade on the Nasdaq Exchange under the stock ticker symbol BLDE. But should we expect the share price to continue moving upward?

I think it’s fair to say that with EXPC and eventually BLDE stock, you’ll be flying first class, because the company is the first in its class.

Blade is, without a doubt, an early mover and emergent leader in urban air-mobility services. The company had 1,000 passengers in 2014, but that number swelled to more than 37,000 last year.

Furthermore, Blade has a vast network of private terminals, or what the company’s management calls “lounges,” spanning across the U.S.

In addition, it’s been reported that the urban air-mobility market is expected to reach $125 billion by the year 2025. Moreover, that figure is projected to increase to $650 billion over the next 10 years.

If you’re ready to invest in a helicopter SPAC, your first and only choice right now is EXPC stock.

And while the share price has started to take off, the market’s expansion potential and Blade’s first-mover status suggest that the runway is clear for significantly higher prices.

EXPC currently has an “A” rating in my Portfolio Grader.