7 Undervalued Stocks That Could Perk Up Under Democratic Leadership

Investors and non-investors alike admire Warren Buffett’s extraordinary success in the business world. One of the key strategies the Oracle of Omaha follows is to buy stocks when they are trading at sale prices. That is to say, undervalued stocks. Buffett and his team hunt for these, since sound stocks under pressure will reward holders when the prices recover.

When it comes to not paying too much, most of us already do that in our daily lives. Before most folks buy a car, they research its value. Even if it’s not a complete match, the information provides an indication. The more research the buyer does ahead of time, the better.

Applying this approach to identify undervalued stocks can become automatic for investors. All it takes is patience and practice.

Here are 7 undervalued stocks that could perk up under Democratic leadership:

With the transition of power to President Biden, we can expect a serious shift in domestic policy over the years to come. These companies are well positioned to profit.

Surprised to see one of the most valuable companies in the world on this list? Well, don’t be.

The stock market doesn’t appraise stocks solely by how much money the company has in its accounts around the world. Many analysts agree that the value of AAPL stock is more than current prices.

Moreover, there are compelling reasons to own this stock. Yes, Apple has very deep pockets. But it also has a stable of attractive products that have an impressively loyal following.

Many of those fans are expected to trade their older iPhones for Apple’s latest version. This smartphone will also allow users to access the 5G communication networks being installed across the country.

InvestorPlace writer Tyler Craig recently explained why Apple is an attractive to stock to buy. 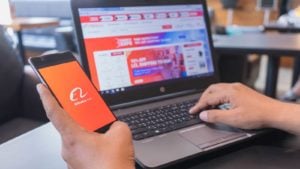 Alibaba is a massive company engaged in e-commerce and cloud services. This company is an increasingly diversified operation.

The United States and China have been in a trade war for much of the last four years. A recent volley was a threat to delist several China-based companies from U.S. exchanges. Additionally, recent legislation aims to force Chinese companies to meet U.S. audit guidelines to remain on U.S. exchanges.

Although investors need to monitor geopolitical currents, I agree with my InvestorPlace colleague Wayne Duggan that Alibaba won’t be delisted here. He writes in a recent article that too many leading U.S. institutions are heavily invested in BABA stock for that to happen.

Alibaba is a well-run company serving a growing market. It’s a clear buy on the dip.

U.S. automakers have been in a slump for a while now, including General Motors. As a result, share prices are depressed.

But the company, which restructured under bankruptcy protection during the Great Recession, was nimble enough to continue its forward-look even during the novel coronavirus pandemic. This work has GM on the cusp of several electric vehicles. Yes, this legacy automaker is poised to compete with names more associated with EVs, such as Elon Musk’s pioneering Tesla (NASDAQ:TSLA).

In fact, GM is accelerating its schedule for launching EVs. The company plans on having 30 EV models by 2025, according to Car and Driver magazine.

This means investors can buy shares of an undervalued-yet-established company competing in the EV revolution.

Next on our list of undervalued stocks is Allstate, a leading insurance company in the U.S. since it was launched by Sears back in 1931.

Thanks to the company’s consistent advertising, Allstate enjoys tremendous name recognition. And luckily for Allstate, the company was spun off by Sears in the mid-90s and was spared a slow death by the parasites that ruined Sears. Allstate is known for customer service and a large network of agents.

These days, however, ALL stock is on sale. It’s trading below price targets set by several analysts who follow the Illinois-based company. Nevertheless, the company has been performing well.

In addition, ALL stock currently pays a dividend of about 1.99%.

Network specialist Cisco Systems, the world’s largest hardware and software provider, is trading below the average price target of $49 set by analysts who follow the company, per Tipranks., CSCO stock is rated a “buy” or “hold.”

CSCO stock is poised to rise once the global economy regains momentum interrupted by the global pandemic. The company enjoys a significant protective moat and is an attractive stock to own in a long-term portfolio. CSCO also pays a 3.17% dividend.

Looking ahead, Cisco is poised to deliver improved performance with earnings per share forecast to increase more than 6% for 2021.

A likely key tailwind is the aftermath of the SolarWinds (NYSE:SWI) hacking scandal revealed in late 2020. Cisco is seeing an increase in its business as companies look elsewhere. Cisco’s network software is an important alternative to the Solar Winds product.

In general, Cisco is viewed as a stable entry in a volatile stock market. And, as InvestorPlace contributor Faizan Farooque recently noted, “Cisco’s firewall and software-defined security products are more relevant than ever.”

QCOM stock is one to watch as the company also is poised for a strong year. One reason: 5G. Qualcomm makes chip components that are key to 5G operations. And investors know that we are in the midst of a global 5G telecommunications rollout.

A Motley Fool columnist recently wrote that Qualcomm also is attractive because the demand for its 5G chipset is expecting to increase. He also said the company’s valuation “does not reflect the opportunity.”

Also, the 5G conversion likely is not tied to performance of the global economy. Put another way, the rollout is expected to continue regardless. The world is ready to embrace the improvements offered in the 5th Generation.

Defense contractor Lockheed Martin is the final company on our list of undervalued stocks.

The company is positioned to benefit from strong demand for its F-35 and F-16 fighter jets as well as its missiles and other defense and aerospace products.

Lockheed reported strong Q3 numbers in October, when earnings beat estimates by 18 cents. Its EPS rose 24% over the last three years. Aerospace operations are expected by some analysts to be the area for fastest growth.

In addition to expected strong demand for its defense products, LMT stock holds appeal because of its dividend yield of nearly 3%. This beats many income stocks.

Writing in InvestorPlace recently, Bob Ciura recently described Lockheed Martin as “a top blue-chip stock for dividend growth investors, as well as the rare security that sidesteps the typical growth versus value tradeoff.”

On the date of publication, Larry Sullivan held a long position in AAPL.

Larry Sullivan is a veteran journalist in Florida who has covered banking and finance for several years. He is a former investing editor at U.S. News & World Report in Washington D.C. and began writing for InvestorPlace in 2020.