MoneyLine Podcast: 3 “S” Industries That Can Make You “$”

It sounds like a Jeopardy question, or I should say answer … 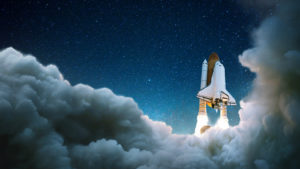 Three “S” industries that can make you rich.

What are space, supersonic air travel, and SPACs?

The fact that they all start with the same letter may be a coincidence … but it’s no coincidence that they’re the focus of today’s new episode of MoneyLine. They represent some of the hottest topics in the market today and for the future, and you can bet they’re on my radar.

The SPAC and space industries are as hot as they come right now, with big money flowing into both. Supersonic air travel hasn’t quite hit the mainstream yet, but that’s often the best time to get in. Longtime MoneyWire readers know that getting in early is one of the keys to making big profits.

This modern day “space race” just started last week when ARK Investment announced that it will roll out a Space ETF sometime this year — and related stocks soared as a result. I respect ARK’s work, so I take a look at the upcoming opportunities in the industry and list a handful of companies with the potential to be major players in the future of space exploration.

From there we’ll stay in the sky and turn our attention to supersonic air travel. It’s hard to it’s been more than 17 years since the Concord was grounded way back in 2003, and we haven’t had civilian air travel faster than Mach 1 ever since.

But that should change in the coming years as a number of companies are working to bring it back to the mainstream. The FAA made some comments on the futuristic form of travel that got me thinking it might be time to start looking for investment opportunities. And yes, I have ideas.

Then, what’s a Friday show without a SPAC attack? Another deal was announced today that sent the SPAC’s shares up 60%! Did you own it?

While we’re at it, I also mention a few other SPACs on my watchlist that you don’t want to ignore. One I even own personally … and you might be surprised to learn what it is.

Finally, we wrap it up with the fan favorite “Ask Matt” segment. I took your questions live from Twitter, and … oh yeah! … I fill you in on what I did last night with my personal crypto account.

I know I say it a lot, but this is really an episode you can’t afford to miss.

Click here to watch the latest episode of MoneyLine now.