With All These Delistings, There’s Just No Good Reason to Buy Ripple

In recent months the crypto market has been in an aggressive bull market with the occasional, but ordinary bump in the road. Still and for investors wanting exposure to this emerging asset class with altcoin Ripple (CCC:XRP), you may want to appreciate the critical difference between low prices and low hanging fruit worth biting into. Let me explain.

And while still just a nominee at the time, her street cred had investors doing more than just listening. For its part, BTC gave up nearly 10% on the week. The bearish reaction also helped bitcoin surrender the entirety of its January’s gains which had reached as much as 46%.

So, what’s all the ruckus about? And what’s that have to do with XRP? In summary, the top government brass expressed interest in “curtailing the crypto market” due to popular acceptance by bad actors doing bad things. Unsurprisingly, the remarks forced altcoin investors to consider the increased likelihood of regulation for digital currencies.

On the plus side, Yellen did dial back her concerns by a notch or two later in the week. The warning also runs counter to top companies Square (NYSE:SQ), JPMorgan Chase (NYSE:JPM), PayPal (NASDAQ:PYPL) and others such as outspoken and celebrated fund manager Cathie Wood who remain busy building various crypto alliances and/or advocating for bitcoin and Ethereum or both.

But make no mistake, altcoin XRP is no BTC or ETH. And that’s from good news for this third or now clearly fourth banana within the crypto market. Today, idle threats that may or may not come to fruition take a very real backseat to Ripple’s status as a potential “unregistered security” under investigation by the Securities and Exchange Commission.

Ripple Has Its Problems

As InvestorPlace’s Josh Enomoto explained earlier this month, unlike other major crypto plays that are created by digital open-sourced mining efforts, XRP’s developer Ripple Labs, controls the altcoin’s supply. And because the coin isn’t fully decentralized, it has opened the door to an inquiry by U.S. regulators.

Right now, the SEC verdict is ongoing. A final decision could wind up canceling XRP. Alternatively, the outcome could also result in a more modest penalty for Ripple’s developer.

Your guess is probably better than mine.

However, in the court of public opinion, crypto exchange heavyweight Coinbase having already removed XRP and other trading platforms expected to follow suit, the opportunity for low-hanging fruit to turn into anything other than a low-priced regret is growing. 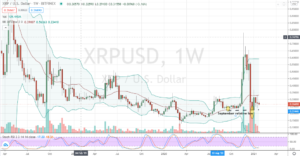 In the stock market low-priced stocks are often discouraged investments. Superficially, XRP does a good job of embodying those concerns with a market price of just 26 cents.

Technically and on platforms where Ripple is still available to trade, XRP decoupled from its asset class two months ago. And two things have happened. First and unlike other major coins, XRP fell well short of establishing new all-time-highs. Second (and possibly more ominous), the crypto has surrendered the entirety of a rally off its September low.

As noted earlier, in BTC only the coin’s most recent investors are sitting on losses. Anyone buying bitcoin prior to January is up. In fact, BTC has only retraced (roughly) a fairly common 38% from its September low to January peak. Moreover, bitcoin remains (conservatively) up more than 200% from those prices.

Bottom-line and for investors that are contrarian by nature, a caveat of ‘for risk capital only’ is increasingly challenged by what’s occurring off and on the XRP price chart.

So while it may still be easy to rationalize buying Ripple for 26 cents under the pretense of “what’s the worst that can happen?” this is one situation where Warren Buffett’s famous words of  “price is what you pay, but value is what you get” comes to mind and deserves your respect.

Stocks owned: On the date of publication, Chris Tyler holds, directly or indirectly, positions in listed Bitcoin and Ethereum stocks (GBTC, ETHE and ETCG), but no other securities mentioned in this article.

Chris Tyler is a former floor-based, derivatives market maker on the American and Pacific exchanges. The information offered is based on his professional experience but strictly intended for educational purposes only. Any use of this information is 100%  the responsibility of the individual. For additional market insights and related musings, follow Chris on Twitter @Options_CAT and StockTwits.