Advanced Micro Devices (NASDAQ:AMD), one of the largest makers of computer and graphics chips, released robust fourth-quarter results on Jan. 26, beating on top and bottom lines. But following the announcement, investors decided to hit the “sell” button in AMD stock.

Despite the rapid drop in AMD shares in recent days, the stock is still up over 75% in the past year.

Santa Clara, California-based Advanced Micro Devices was founded in 1969. It went public only a few years later in 1972. From small beginnings, AMD now boasts a market capitalization of about $103 billion, a number that has grown significantly over the past two years alone.

Last year, semiconductor businesses like AMD were among those shares that sold off rapidly in the novel coronavirus triggered sell-off during February and March. Yet like most tech stocks, chip shares have had a remarkable comeback since hitting 52-week lows in late March 2020. In fact, AMD stock saw a record high on Jan. 11, 2021. Its 52-week price range has been $36.75 – $99.23. 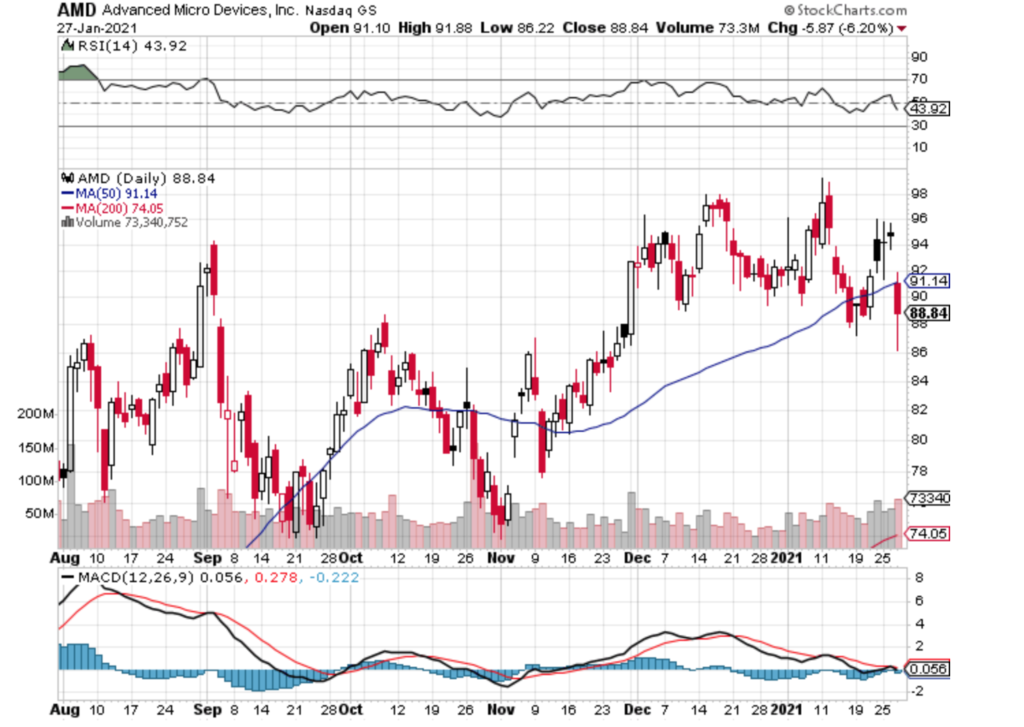 In the long run, I remain bullish on the future of the chip industry and AMD stock. Therefore, potential investors might regard any decline in price as an opportunity to buy AMD stock. Here’s why.

Exceptional Growth In The Chip Space

Semiconductors are key components in products ranging from radios and television to video games and diagnostic equipment.

In 2009, AMD divested from manufacturing operations and shifted to a “fabless” semiconductor business. It spun off its factories into a joint venture called Global Foundries. Being fabless means that you outsource the fabrication of the semiconductors to another company. In the joint venture, AMD ensured that it could keep an eye on this key part of the process.

Another technical part of AMD that it has been successful at in recent years is reducing the size of CPU nodes. These are processing units, of which a normal computer has many. One of the unique selling points that AMD has over its rivals is that the CPU nodes are smaller in size and are more powerful. Naturally, this has led to many tech companies choosing to use their nodes instead of others. For example, these small CPUs are used in many small notebook computers.

The company’s innovative approach in design, manufacturing, as well as leadership has meant value for shareholders. Under the leadership of Lisa Su, the share price has risen from $4 in 2014 to a current level of more than $85. It’s been one of the biggest gainers within the S&P 500 index over the past three years.

Given the quality of businesses in the index, that is quite impressive!

Investors noted the strength of AMD’s products as well as the “robust demand for high-performance computing across the PC, gaming and data center markets,” according to AMD’s earnings statement.

Net income in the fourth quarter of $1.78 billion translated into diluted earnings per share of $1.45. Cash and equivalents stood at $2.29 billion. Free cash flow was $480 million. A year ago, it had been $400 million. The company also expanded its gross margin from 43% to 45% over the past 52 weeks.

AMD guided for first-quarter revenue of $3.1 billion to $3.3 billion, which would be an increase of 79% year-over-year.

So why did investors sell AMD stock following the results? These strong metrics were, in part, already built into the share price. Besides, most tech shares have come under pressure in recent days. Thus it would not have been quite possible for AMD to be spared from broader market declines.

Meanwhile, for Wall Street analysts, it’s still very much a love affair with AMD stock. The average price target for the shares is over $100. Strong server and game console growth are expected to create tailwinds for the shares.

The Bottom Line on AMD Stock

AMD stock’s forward price-earnings and price-sales ratios currently stand at 52.6x and 11x, putting the valuation on the frothy side. As we enter February, markets, and especially tech stocks, may get volatile, which could put further pressure on the company’s share price.

Looking past such a short-term weakness in price, I think AMD could continue to offer high growth potential. By continuing to move forward with new products and improving existing ones, AMD should stay ahead of the curve. This makes me bullish on the stock into the long term.

Therefore, buying AMD stock on weakness could prove a profitable move for long-term investors. I’d regard any drop toward $80 or below as good opportunity to invest in the shares.

On the date of publication, Tezcan Gecgil did not have (either directly or indirectly) any positions in the securities mentioned in this article.

Tezcan Gecgil has worked in investment management for over two decades in the U.S. and U.K. In addition to formal higher education in the field, she has also completed all 3 levels of the Chartered Market Technician (CMT) examination. Her passion is for options trading based on technical analysis of fundamentally strong companies. She especially enjoys setting up weekly covered calls for income generation.