Amid the current solar boom, the prospects of the sector’s stocks continue to look very bright. People who invest in solar stocks now can generate strong profits from them in the next six weeks, which should help overcome the winter doldrums.

In December, the U.S. Congress extended the investment tax credit for solar energy projects by another two years. In January, President Joe Biden announced that the U.S. would rejoin the Paris Climate Accord and said that America would seek to eliminate carbon emissions from its power sector within 15 years.

Meanwhile, after Biden suspended restrictions on Chinese companies selling products for use in America’s bulk power system. I’m more convinced than ever that the president will, in every plausible way, look to reduce tensions between Beijing and Washington.  I expect him to lift the tariffs that former President Donald Trump had imposed on Chinese solar products within the next two months.

That move will provide a big boost to most solar stocks. For Chinese solar companies, including JinkoSolar (NYSE:JKS) and Daqo New Energy (NYSE:DQ), their products will become much cheaper, lifting demand for them.

For American companies that import solar modules from China, including NextEra (NYSE:NEE), the cost of those modules will drop tremendously, lifting their bottom lines.

Meanwhile, both China and the EU meaningfully raised their carbon-reduction targets in recent months, while many other nations, including India, Japan and Saudi Arabia, continue to expand their use of solar energy.

Finally, research firm Wood McKenzie recently predicted that solar, which is already cheaper than any other source of new electrical power generation in 16 American states, could obtain that status throughout the country in 2030.

Given all of these points, I continue to recommend that investors buy JKS stock, DQ stock and NEE stock.

The largest manufacturer of renewable energy in China, JinkoSolar was recently named the most bankable solar module manufacturer by Bloomberg.

The company is well-positioned to benefit from the growing demand for solar energy. In fact, Jinko plans to launch a 20-gigawatt solar-cell factory by the end of this year. The facility will triple its overall manufacturing capacity, greatly raising its top and bottom lines in 2022.

JinkoSolar has won multiple awards recognizing the exceptional quality of its solar products, and its recent stock offerings should enable it to meaningfully reduce its high debt levels.

Daqo develops polysilicon, one of the raw materials used to develop solar modules. Demand for its product is expected to be higher than supply this year, a nice problem to have. Meanwhile, Daqo’s polysilicon is sold out for all of 2021 and most of next year.

Also boosting Daqo’s results and DQ stock is the fact that polysilicon prices have climbed in recent months. In the last two quarters of 2020, the raw material’s price increased by 30%.

As a result of all of these positive trends, Daqo’s gross margin is expected to jump 2.6 percentage points this year, and its EBITDA is expected to surge nearly 90% to $458 million.

Despite those impressive numbers, DQ stock has a reasonable forward price-earnings ratio of 28.7 and a fairly cheap forward price-sales ratio of 6.6. Moreover, its market capitalization is a relatively low $6.1 billion giving DQ stock ample room to rally further. 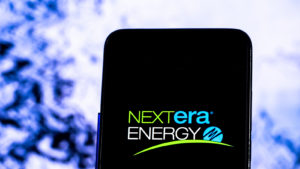 An owner of multiple electric utilities and a unit that sells clean energy to other users, Florida-based NextEra claims to be the world’s largest solar and wind energy generator.

The company intends to add more than 6.5 million solar panels in Florida over the next three years and 30 million panels by 2030. All told, it expects its Energy Resources division to add 23 to 30 gigawatts of renewable power in the next three years.

Benefiting both from Florida’s population growth and its renewable-heavy strategy, NextEra reported strong 2020 financial results. Excluding certain items, the company’s earnings per share jumped to $2.31 from $2.09 in 2019, although its operating cash flow did slip slightly to $7.98 billion from $8.16 billion.

I believe that NextEra is poised to benefit from the proliferation of electric vehicles. One of the leading sellers of solar power battery-storage solutions, NextEra should also be boosted by strong demand for such batteries as solar energy becomes much more popular in the U.S.

NextEra is a good play for conservative investors who want exposure to solar energy and renewable energy. NEE stock has a 1.7% dividend yield and, given its strong, positive catalysts, it has a reasonable forward price-earnings ratio of 32.

On the date of publication, Larry Ramer held long positions in JKS and DQ.

Larry has conducted research and written articles on U.S. stocks for 13 years. He has been employed by The Fly and Israel’s largest business newspaper, Globes. Among his highly successful contrarian picks have been solar stocks, Roku, and Snap. You can reach him on StockTwits at @larryramer. Larry began writing columns for InvestorPlace in 2015.