Palatir (NYSE:PLTR) has faced a lot of doubt, but also a lot of enthusiasm from investors since going public in September 2020. PLTR stock began trading below $10 a share but quickly found its footing in November.

The stock was trading modestly between $9 and $11.50 before breaking out that month. In a three-day rally, shares overcame resistance and climbed almost 40%.

This is a pattern investors must get used to with explosive stocks. While Palantir doesn’t have the track record that many other tech stocks do, it’s showing similar patterns already.

That pattern is a series of consolidations followed by quick, explosive moves to the upside.

Advanced Micro Devices (NASDAQ:AMD) is similar in that regard. Can PLTR stock keep up this action? Let’s look at charts and then dive into the fundamentals. 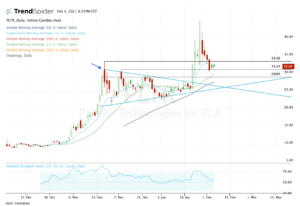 When Palantir broke out in November, it was a big move.

Shares rallied in 13 of 16 trading sessions, generating a 178% return in that stretch. That measures until Nov. 25. If we stretch that rally to the highs a day later, the gains eclipse 220%, although the stock then pulled back from there (marked on the chart with a blue arrow).

That pullback started a multi-month consolidation phase, with shares trading sideways to lower for several months.

In late January, PLTR stock broke out over downtrend resistance (blue line) and closed above the December high. The next day, it made new all-time highs, then did so again two days later.

We’ve now got another pullback in Palantir, as shares digest the recent run. Perhaps it was a bit of the Reddit frenzy going on or maybe bulls just saw an opportunity to run the stock.

Either way, shares are basing nicely in the low-$30s. However, the 10-day moving average continues to act as resistance. A move back above this level as well as the prior high at $33.50 could trigger a move back above $35 and into the upper $30s.

On the downside, a break of this week’s low at $30.50 could put the 21-day moving average in play. That’s followed by the 50-day and a retest of prior downtrend resistance.

For now though, PLTR stock could be setting up nicely for the bulls, as the stock rests after a big surge.

Is Palantir a Worthy Investment?

Because Palantir is relatively new to the investment world, some may not know what it does. Palantir bills itself as an organizing software company. A one-stop-shop for integrating data, decisions and operations.

It began providing information systems for the defense industry but has bloomed into a data organizer for both government and industry.

Big data stocks have a huge opportunity in front of them, be it Snowflake (NYSE:SNOW), Alteryx (NYSE:AYX) or Palantir, among others.

In Palantir’s case, the revenue is there. After generating ~$740 million in sales last year, analysts expect more than $1 billion in revenue this year. In 2021 and 2022, estimates sit at $1.4 billion and $1.78 billion, respectively.

In other words, the company is looking at going from $740 million in sales in 2019 to $1.78 billion in 2022. That’s pretty darn impressive. That said, we’re paying for that growth when it comes to the valuation. PLTR stock trades at 39 times 2021 revenue estimates.

However, Snowflake trades at 78 times next year’s expectations, so maybe Palantir’s valuation isn’t so bad.

Look, I hate to say this, but here’s the truth when it comes to growth stocks: Valuation doesn’t matter until it does.

But that doesn’t make any sense.

I know, but unfortunately, it’s the truth. As long as the stock is trading well and the company keeps delivering, a valuation can stay irrational far longer than investors think.

When either of those trends break — and they often go hand in hand — then suddenly, valuation is of the utmost importance for investors.

For now, we’re not there with PLTR stock. Like Nio (NYSE:NIO), it’s hard to bet against a stock purely on valuation when the stock price isn’t yet working in shorts’ favor. If the valuation is a problem for investors, they can simply avoid this one.

Otherwise, Palantir may very well continue higher. Valuation is what investors are willing to pay. Right now, they’re seemingly comfortable with it. When that changes, the stock will show it.

On the date of publication, Bret Kenwell held a long position in AMD.