When it comes to 3D printing leader Desktop Metal (NYSE:DM), it’s all about the Fourth Industrial Revolution. That is, you should buy DM stock today because the company is at the epicenter of a seismic shift in how factories and manufacturing plants across the globe operate. 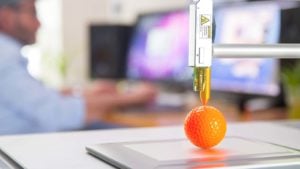 These industrial seismic shifts happen only about once a century.

When they do happen, they unlock significant economic value — and companies at the epicenter of them go from niche afterthought one year, to titan of industry the next.

Desktop Metal will do this as the Fourth Industrial Revolution sweeps across the globe over the next few years.

And, as that happens, DM stock will turn into one of the market’s biggest winners.

But … Fourth Industrial Revolution? 3D printing? Desktop Metal? How does it all fit together?

Let’s have a deeper look:

Throughout history, we’ve seen that when technology evolves particularly fast, the world undergoes a mass, disruptive makeover that historians like to call “Industrial Revolutions.”

The First Industrial Revolution happened about 255 years ago – in the late 1700s – when humans learned how to harness the power of steam to mechanize the production of physical items.

About a century later, the Second Industrial Revolution began, when humans learned about electricity, gas and oil, and leveraged these newfound powers to unlock a novel era of transportation and mass production.

Then, about a century thereafter, the Third Industrial Revolution began, when digital machines like computers, cellphones and TVs emerged.

Each time one of these Industrial Revolutions happens, the world changes. Forever. And in that change, old technologies fall by the wayside, while new technologies become ubiquitous and help define a better, more efficient future.

Right now, we are in the midst of a Fourth Industrial Revolution.

It’s a world-changing shift toward automated, hyper-connected, hyper-efficient and – in some cases – decentralized factories, enabled by breakthrough advancements in Big Data, IoT and cloud computing. In plain English, we are going from a few big, human-powered factories today, to multiple smaller, AI-driven factories tomorrow.

Much like previous Industrial Revolutions, this shift toward Industry 4.0 will spark enormous disruption across the world’s supply chain.

And — back to my favorite phrase of all time — where there’s disruption, there’s opportunity. This opportunity is what makes DM stock such an attractive investment idea.

The Rising Importance of 3D Printing

But, before we get into talking about DM stock, we need to first discuss the important role that 3D printing will play in the Fourth Industrial Revolution of the 2020s.

Back in 2013, 3D printing (or “additive manufacturing,” as industry insiders like to call it; “AM” for short) was a novel concept that many futurists predicted would take over the world as everyone turned their homes into “mini-factories.”

Of course, that didn’t happen.

The reality is that additive manufacturing is a complex, costly, laborious, and time-consuming process which most consumers have no use for in their homes.

But… over the past few years… additive manufacturing has emerged as a core technology of Industry 4.0.

Industrial AM machines have made huge advancements in cost, speed, and ability since 2013, to the point where they are now capable of quickly and cost-effectively mass-producing metal end-use parts on the factory floor.

These advancements have come at the same time that Industry 4.0 has raised the standard for customization and automation in the world’s supply chains – two things which AM is particularly good at…

The result? It’s become increasingly clear that more and more manufacturers across the globe will rejig their assembly lines over the next few years to include metal AM machines for mass-producing specialty and custom parts.

Insiders are calling this the emergence of the Additive Manufacturing 2.0 era – and it’s expected to grow the AM market by more than 1,000%, from $12 billion today, to nearly $150 billion by the end of the decade.

The Industrial AM Leader

At the forefront of this breakthrough in industrial AM is Desktop Metal.

In short, Desktop Metal makes advanced metal AM machines for use across manufacturing supply chains, all the way from rapid prototyping to mass-scale, factory-floor production.

For various reasons, the company represents the market’s best pure-play on the industrial AM boom.

For starters, the company has the right roots.

Desktop Metal was founded in late 2015 by a bunch of genius MIT professors and well-respected 3D industry veterans, meaning it’s the brain-child of some of the most capable people in this space. Kleiner Perkins – the venture capital firm that backed Amazon and Google in their early days – is also one of Desktop Metal’s earliest and largest investors.

Thanks to this confluence of unrivaled talent, Desktop Metal has created and patented a breakthrough technological process in industrial AM called “single pass jetting.”

The nuts and bolts here are complex (at a high level, AM machines build objects layer-by-layer, and while most printers have to go over a single layer multiple times before it’s finished, Desktop’s printers only have to do a “single pass”).

But the result is simple: Desktop Metal’s printers are the fastest in the industry. By a long shot.

Faster means lower costs, because one Desktop printer can print as many end-use products in one day as three or four traditional 3D printers.

In addition to all of that, Desktop Metal has secured a global distribution network over 80 partners across 60 countries, and created a SaaS offering to complement its printers (thereby setting up a highly profitable, recurring software business model on top of its hardware AM business).

From head to toe, Desktop Metal is the best-in-breed player in an AM market that’s set to soar by more than 1,000% over the next decade thanks to the inevitable and world-changing shift to Industry 4.0.

My numbers indicate that Desktop Metal has visibility to grow from about $25 million in revenues today, to well over $5 billion in revenues by 2030 as AM machines start to become commonplace across the world’s assembly lines.

Operating margins should scale to north of 35%, because Desktop Metal’s single-jet passing tech should give the company tremendous pricing power, and because the complementary software business is exceptionally high margin and will comprise a bigger and bigger piece of the revenue pie over time.

Combining those two assumptions, I see Desktop Metal netting profits just north of $2 billion by 2030. Based on a 20X multiple, that implies a long-term valuation target of $40 billion.

At the current DM stock price, Desktop Metal is worth about $5 billion.

Desktop Metal stock is a long-term winner. It’s a solid bet on the increased usage of industrial AM machines on factory floors. If Desktop Metal can sustain its technology advantage in this market, then DM stock could turn into a multi-bagger over the next few years.

P.S. Speaking of multi-bagger gains, I like to say that where there’s disruption, there’s opportunity. And there’s a massive opportunity happening right before our eyes.

Remember how Jeff Bezos looked at the state of the retail market, and he created Amazon.com in response? Yes, this opportunity is that huge.

As you know, I don’t make stock picks on a whim. I spend countless hours analyzing them, creating models, and measuring their long-term potential. It’s how I got to be America’s No. 1 stock picker, according to TipRanks.

So believe me when I tell you that there’s a stock out there that could very well become “the next Amazon.”

I’ll continue to tell you more about this hypergrowth opportunity over the next week and, on Feb. 23, I will reveal its industry, name, and ticker symbol… for free.

Mark the date on your calendars, folks!